When Rodney King was severly beaten by 4 LAPD officers and the police were found not guilty, Los Angeles exploded in rebellion and riots.Thousands upon thousands of working-class residents of all races broke into commercial stores taking commodities for free.

The media tried to paint the riot as angry violent Black people attacking working-class white people and Korean shop owners– they were consciously trying to turn the multi-racial rebellion into a racial war.  But the media was not able to supress a powerful radicalization of LA consciousness.  Bloods and Crips started having serious discussions about unity, positive revolutionary energy was flowing from the ghettos and working-class neighborhoods; these developments are captured well by the documentary Bastards of the Party.

It’s important to remember that we are all facing the sentencing hearing for officer Mehserle on November 5th. The flyer above is the political effect of the radicalization produced by the ’92 Los Angeles rebellion against the acquittal of Rodney King’s attackers. What do these two struggles, separated by 18 years, have in common? The Oakland/SF local (Local 10) of the longshoreman’s union ILWU is planning to do a job action and/or rally on October 23rd to fight for justice for Oscar Grant, and militant rank-and-file union members have argued that their radical action in isolation will have a very limited effect. One ILWU rank-and-file worker argued that what we need is for BART (lightrail) workers, bus drivers, government workers, private workers, to also shutdown their workplaces in the name of Oscar Grant. This form of struggle can be more effective than breaking windows or pleading with the government through non-profits because it uses the greatest power that working people have: our ability to get organized and control the economy. We’re posting the flyer from ’92 to make these kind of connections with another historical moment where riots began an ascending wave of radicalization. Around the country people look to the Bay as the current front lines of the struggle against police brutality: will we rise to the new possibilities and show ’em how it’s done? 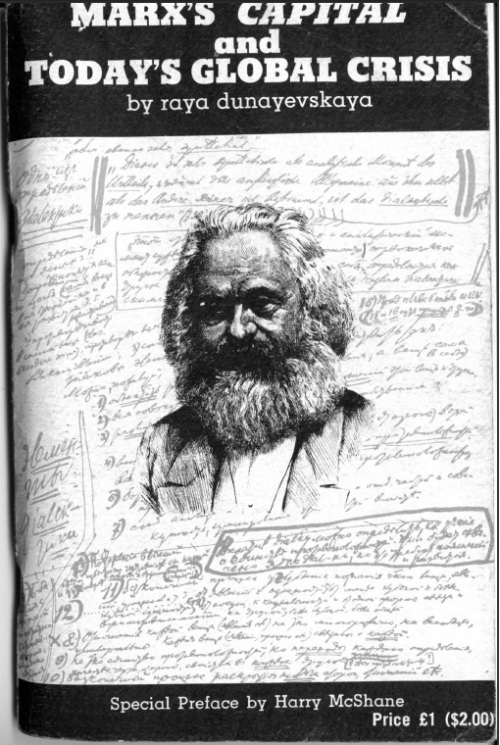 Click Here to touch 5MB of the magic! (Blueness not shown.)

Millions of workers have been laid off since the 2007 crisis, creating a new political world where turbulence is to be expected in the coming period.  A new generation of activists has been reading Karl Marx’s Capital to understand our changing contemporary political reality.  This new political reality demands a political theory to explain and help transform it.  Who is building a revolutionary framework for this process?  The contemporary revolutionary left is largely an extension of 1960s Trotskyist and Maoist groups, fighting for correct leadership over movements, or anarchist and insurrectionist currents, trying to set a spark to the dry wood of the people.  Are these our only revolutionary political options? Raya Dunayevskaya, great but generally-ignored Marxist theorist, was at one point Trotsky’s secretary but later broke from and critiqued Trotskyism through the Marxist method.  Well-known Trinidadian co-thinker CLR James (author of The Black Jacobins on the Haitian slave revolution) has overshadowed her, and she is often dismissed as a cult leader.  One day, a member of Advance the Struggle found a Dunayevskaya pamphlet that AS militants informally labeled “The Magical Blue Pamphlet” (MBP).

It is often assumed that Marx’s Capital is a work that explains Capitalist economics.  And it does, but to reduce it to that ignores the revolutionary fire built into the text.  Raya recontextualizes Capital by demonstrating how it embodies the experience of revolutionary movements; this provides a direct challenge to theorists like famous Trotskyist Ernest Mandel, whose “vulgarization of Marx’s analysis of the dialectical relationship between production and its reflection in the market” Raya smashes on in “Today’s Epigones Who Try to Truncate Marx’s Capital.”  One of Dunayevskaya’s central points is that capital is not a thing that oppresses us but a relationship we are subjected to.  She explores how the American slave revolts and the Paris Commune formed and deepened Marx’s understanding of capital, summarizes the three volumes of Capital as a singular political unit of revolutionary logic, then finishes the pamphlet by exploring the Russian revolution.

END_OF_DOCUMENT_TOKEN_TO_BE_REPLACED

What’s Next in the Struggle for Oscar Grant?

The outcome of the verdict for Johannes Mehserly, the cop who murdered Oscar Grant, left people with feelings of outrage, disappointment, and defeat, and rightfully so. We live in a world where police can kill innocent and un-armed people, have it captured on video, and still get off. The fact that Mehserle was convicted at all should be seen as a partial victory for the black working-class of Oakland. That victory was largely due to the black and brown Oakland youth who took the streets, and made the system listen to them as they bashed in windows of banks, corporations, and other sources that profit off of the exploitation and murder of black and brown people. When the day of the verdict finally arrived on July 8th we found ourselves in a similar place: angry in the streets with no real outlet to fight back. Our options were dismal, chaotic rioting on one end, and non-profit sponsored apolitical, non-violent speak-outs on the other end. Im not against rioting or community expression, but none of these options represent a concrete and effective way for people to resist, a way to flex their power as people and workers, while simultaneously striking back against the bourgeois state that relies on the police to repress our resistance through murder and incarceration

The day of the sentencing is November 5th, which is three months away. People are still angry and we have plenty of time to do something about it, but what? We have tried a variety of tactics from symbolic rallies and marches to riots/rebellions, and nothing has managed to bring justice for Oscar Grant, and the Black working-class yet. It’s time to try something different. A huge jumping off point for this is the recent involvement of the Longshoremen who are a part of the ILWU local 10. So far the Oscar Grant struggle has been organized mainly by activists, and community members with no involvement by organized labor. The longshoremen have a reputation of being one of the more militant unions. They have shut down the coast numerous times for political reasons: apartheid in South Africa, Mumia, and most recently for Palestine. The longshoremen also have majority Black membership, and their reps have experienced state violence on the job and during actions. All these things have fueled their own interest to get involved in the Oscar Grant struggle. They recently had a meeting, which they opened up to the public, to discuss the planning of a protest on Saturday October 23rd, where two major outreach committees were created to try to mobilize the community and other sectors of labor. This demonstration has the ability to bring in 1000’s of workers and community members if the organizers build it right.

So you are probably wondering how this demonstration is different from any other symbolic protest. It will be another permitted, Saturday afternoon action that probably won’t change a thing. There is some truth to that, but this demonstration is deeper than it seems initially. First of all there is potential to shut down the ports that day, because the Longshoremen work Saturdays. If the ILWU is able to mobilize all their members and locals to the demonstration that day, then there will be a work-stoppage, and that is significant in its own right. Politically this demonstration represents an opportunity for us to bring in people from different struggles and sectors of labor and the community. The most active struggles right now have been for Oscar Grant, Immigrant Rights and the Budget Cuts. All of these struggles have been disconnected from each other in key ways, which has been a huge weakness of the organizers in these struggles, because not only are we stronger when we are united, but these struggles are organically connected. They all share the same enemy: the racist, sexist capitalist system.

When black and brown youth walked-out to protest the budget cuts during March 4th this past year they made that connection. They weren’t just talking about budget cuts and their schools; they were talking about police and incarceration. They understand that when 90% of the Oakland bailout budget goes to killer cops and not schools that the budget cut movement should be a part of the Oscar Grant movement. Did I mention that 90% of the bailout money went to OPD? Why aren’t we making these connections? When Arizona passed the racist, anti-immigrant law SB 1070 Oakland youth took the streets again walking-out on April 30th, a friday, to protest a system that oppresses the black and brown working-class. At the bottom of all three of these struggles is the violence of the state, both direct and structural, being aimed at working-class communities of color.

With organized labor being at such a low level in this country it is a qualitative advancement in the Oscar Grant struggle to have the ILWU get involved. It also moves us closer to making these connections between the struggles so we are stronger and more united as a class. We need to reach out to other sectors of labor to have them turn out as well. AC transit workers in Oakland are already upset over their contracts and there has been “labor unrest”–workers even directly intervened in the work process by ‘sicking out’ in large groups; the Oakland teachers union, OEA, went on strike April 29th and most likely will go on strike again this fall; high school students have walked out twice; immigrant communities have protested in SF and in Oakland for May 1st and again against the implementation of SB 1070; MUNI drivers in SF are upset over their contracts while the city tries to pit drivers (who, it should be noted, make significantly less than SF pigs) and riders against each other. There is huge potential to have a mass convergence of organized and un-organized labor, youth, activists, and community members to come out on October 23rd to protest a system that takes money out of our schools and into a racist police system that criminalizes and murders immigrants and black people; to protest a system that continually exploits and doesn’t take care of its workers who drive buses, BART, clean up our streets, our businesses, and teach our children. Not only would this be a day where we can all get together and share our struggles, but it will also be an important day to help build up November 5th.

Due to the work of hundreds of in the Bay Area, the underlying unity of these struggles is starting to take shape explicitly. We know October 23rd is not enough. We know that no conviction or sentence for Mehserle would represent true justice while the racist violence of the state continues to terrorize black and brown communities. We know that we have little chance at dignity and justice in a world with few opportunities and intensifying austerity. We also know that by coming together in the thousands to take direct control of our city, we have a real chance to go beyond partial victories, to fight back effectively against the budget cuts and pigs of all kinds, against the violence of the state in all its forms. This Fall, no struggle needs to stand alone. Justice–November 5th.