Recently the ILWU called for a rally on October 23 and expressed interest in a work stoppage to ensure that Johannes Meserle receive the maximum sentence for the murder of Oscar Grant. The ILWU have a long history of taking a leading role in periods of mass struggle and of engaging in political strikes. The San Francisco General Strike started when state and private police killed 2 longshoremen as they tried to break picketlines that had closed not only SF ports but all of the ports on the west coast for 2 and a half months. In 1973 the ILWU refused to ship munitions headed for Chile following the military coup and suppression of the Cordones (workers councils). In 1984 the ILWU shut down the ports for 11 days in a political strike against aparthied in South Africa. 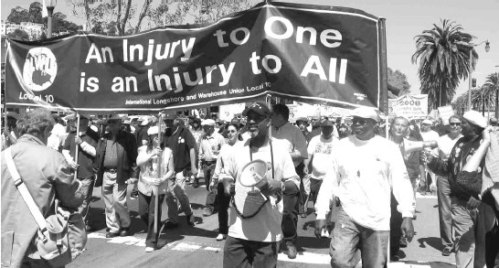 The ILWU is able to take such militant action without being destroyed by the ruling class because the longshoremen occupy such a strategically strong position in the production of profit – the unloading of the majority of commodities headed for consumption. Harry Bridges, along with a rank-file committee organized and led a strike in 1934, quickly growing into a general strike through all of San Francisco and even Oakland, it continues this militant historical legacy into an array of other struggles long after. The ILWU is now throwing their weight into the struggle for justice during a period of racist state murder and mass incarceration marked by the deepest economic crisis in capitalist history. On May 1, 2008, International Labor Day, they shut down all of the west coast ports in a one day political strike against the war. On June 20 of this year the Longshoremen refused to cross a picketline blocking the entrances to the port to stop an Israeli ship from docking in the wake of the Freedom Flotilla Massacre. Now they are calling for a rally on the 23rd of October at Oakland City hall and may shut down the ports.

Johannes Mesherle was the first police officer to be convicted of killing a black man in United States history. Why is it that during a period when the capitalist ruling class is tearing out the floorboards and the studs from the walls to throw into the furnaces of profit that they convicted this man? Is it because of the half dozen witnesses and video cameras that recorded Mesherle shoot Oscar in the back after making racial slurs at him? The KKK and the police have been murdering young black men in front of witnesses for centuries. On the night Oscar Grant was shot another young black man was shot 8 times in the back of the head in his car after trying to evade police in Los Angeles. On the same night a young black man was shot nine times in the back by police in New Orleans.

Mesherle was convicted because the repressive tool of the ruling class, the state, is scared that they will awaken a sleeping giant: highly oppressed working class black and brown people. They were scared when Oakland youth took to the streets on January 7, 2009 and they subsequently arrested Meserle on January 13. They were scared that having the trial in Oakland would awaken more critical consciousness in a city where 90% of the bailout money went to the police while childcare, welfare, education, and healthcare are being gutted, so they moved the trial to LA. They were scared that an accquittal would result in sustained resistance and militant organization in addition to spontaneous street rebellions, so there was a minor conviction. And now the Longshoremen have taken a step towards qualitatively advancing this struggle to a new height by putting the possibility of political strikes on the table. Now what fear can we strike into the ruling class? What justice can we really get? What will it take to put an end once and for all to racist police murder? At a time when prisions are proliferating while schools and hospitals for low income communities are closing in scores, at a time when the last workers making a living wage are being cast aside while contractors get billions for pointless construction projects, one thing that all of the oppressed people struggling for freedom in these different sectors can join together and fight for is justice for Oscar Grant.

And this is something that terrifies the capitalist ruling class. It sends chills down to their bones. The capitalists are sitting on 60 trillion dollars of fake money and can’t make profits anymore without looting the treasury; they are weak so they know full well the danger of an organized militant class conscious working class that wants justice. They know that when we see another intelligent, outgoing, and vivacious young man’s life so tragically cut short by the enforcers of the same laws that have allowed the elite to squeeze every last drop of value from our labor, we might just take up the struggle for liberation with a degree of unity and determination that could actually win. We can get justice for Oscar Grant. And we can also get justice for ourselves. This call from the longshoremen is an invitiation to all working people to make the worst fears of our oppressors come true. If we succesully organize a general political strike for the 23rd, there is no doubt that he would receive the maximum sentence. Hell they might even give him the death penalty if we really shake things up. But the real justice will come when we come out of this struggle with a new level of militancy, consciousness and organization that can liberate us from the cycle of exploitation, incarceration, and imperialization. When we not only make an example out of a racist killer cop, but build a movement that can eliminate the structures that create racist killer cops, that is when we will have justice for Oscar Grant. So please take this resolution to your union, and go on strike on October 23rd! Get your union to build for a strike and rally on the 23rd!

Whereas, Oscar Grant’s killer, BART police officer Johannes Mehserle received a verdict of involuntary manslaughter on July 8, 2010 and will be sentenced on November 5; and

Whereas, video tapes show clearly that Oscar Grant was lying face down on the Fruitvale BART platform, waiting to be handcuffed with another cop’s boot on his neck posing no threat when he was shot in the back and killed in cold blood by Mehserle; and

Whereas, wherever employers try to break a strike, police are there to protect the scabs and attack workers, as we know from the 1934 West Coast Maritime Strike, to the Charleston Five longshore struggle in 2000;  and

Whereas, black and brown racial minorities, and especially immigrant workers today, struggling for equal rights have borne the brunt of police violence; and

Whereas , Oscar Grant’s killing is another manifestation of the same  unjust system where the message for the poor, the working class,  and people of color is submission or death; and

Whereas,  ILWU Local 10 has initiated the call for a mass labor and community protest rally on Saturday October 23, 2010 in Oakland’s Frank Ogawa Plaza calling for justice for Oscar Grant in the sentencing of Johannes Mehserle,

Therefore be it Resolved, that (name of organization) endorses this rally along with other labor unions, community groups, civil rights organizations, civil liberties organizations and will help to mobilize for this rally for justice for Oscar Grant;

Leave a Reply to a comrade Cancel reply