What Communists Can Learn From Native Struggle: Sogorea Te and Primitive Accumulation

Driving North from Oakland, past West Berkeley’s smokestacks and Richmond’s industrial warehouses, you eventually cross the Carquinez bridge to the first city in what is referred locally as the North Bay – Vallejo, “The 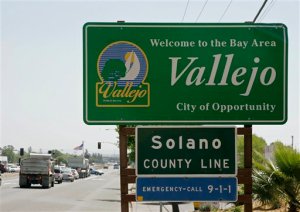 City of Opportunity.”  Vallejo is known as the home of Mac Dre, Sly Stone, and E-40 (amongst others), as well as to a sizeable Pilipino population.

The city bears the name of General Mariano Guadalupe Vallejo, one of the biggest beneficiaries of the Treaty of Guadalupe Hidalgo, that piece of paper that codified the theft of over half of Mexican land. That treaty marks the transition from Mexican colonial domination over native american peoples, to an even more heinous form of racial domination under Anglo rule. Indians were the base of the productive system as slaves to Mexican and Anglo ranchers, producing wealth that carried California eventually to become the richest state in the richest country in the world. Today, Vallejo is known internationally as one of the first cities to go bankrupt during the financial meltdown of ’07-’08 and the native community is rising to assert their legacy, reclaim their history and resist capitalist development of one of their most precious ancestral burial grounds:  Sogorea Te, or Glen Cove.

For over 50 days now, members of the native community and their allies have been camped out at Glen Cove in protest of the Greater Vallejo Recreation Department’s (GVRD) plans to develop the land into a parking lot as part of the Bay Trail project.  Now, we’re all for the nature, the “bike revolution,” and recreation, but not at the expense of one of the most important cultural sites of the original peoples of this land we call California.  In the words of the Protect Glen Cove website:

The local Native American community has been outspoken for over ten years about the Glen Cove Sacred Site, and the message has been overwhelmingly: do not further disturb and manipulate this sacred burial ground of our ancestors. It is not a park. Spiritual leaders from Ohlone, Miwok, Pomo and other local tribes consider the proposed park development plans to be an offensive desecration of this holy area that has already seen many years of abuse in the hands of settlers. Furthermore, we consider the manipulation of our ancestors’ burial site without our informed consent to be a violation of our human and religious rights.

Now, the Sogorea Te site is most definitely an important part of the native people’s cultural heritage and history, 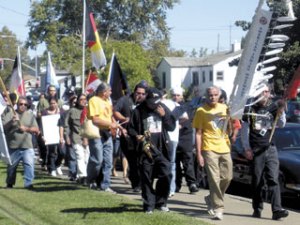 and it’s the duty of radicals to be in solidarity with anyone struggling to defend their interests against the expansion of capital and its state.  However, in addition to the defense and expansion of native people’s autonomy, there is another reason that this fight needs to be seen in the context of the struggle for a communist revolution.  You may be wondering, what is the connection between religious burial sites and communist revolution?

Well, let’s examine the religion of the Native tribes of the Bay Area and the mode of social reproduction that their religious and cultural practices existed in. The book The Ohlone Way describes how Bay Area native societies reproduced themselves through hunting and gathering food and other necessities for daily survival.  Private accumulation of surplus food and materials (ie, wealth) was not known to these peoples.  Their societies were egalitarian, not stratified by social classes, and free from the domination of a culture of individualism and greed.  Additionally, the native tribes were organized in a de-centralized manner that did not require a state apparatus to maintain a sense of cohesion and co-existence amongst the various tribes and their relation to the land.  Generosity and humility were not considered virtues, they were normal characteristics expected of everyone. This is the first and original type of communism; the basic principles for the future communist society already having been accomplished by humanity, proving that it is not “human nature” to be selfish, violent, oppressive, and out of balance with the earth’s equilibrium, or to enslave womyn as baby making machines.

Karl Marx referred to these communal societies as forms of “primitive communism,” not because he saw these societies as somehow “backwards” but rather “primitive” in the actual sense of the word:  primary, original, first.  Marx uses the word “primitive” in a related context when he discusses the primitive accumulation of capital, or the original methods used to develop capitalist society.  The main form of primitive accumulation which Marx describes is the way in which native peoples who lived off the land were dispossessed of this land in order to make way for capitalist development.  Though the primitive accumulation of capital defeated primitive communism, it also developed the material basis for a new communism to arise out of the ashes of capitalism: the proletariat, capital’s own gravediggers.

Unfortunately, many proletarian movements of the 20th century did not integrate the wisdom of indigenous peoples into their political programs, so they often disregarded their relation to the land, and brushed aside an awareness of equilibrium between past, present and future generations and the sustainable development of 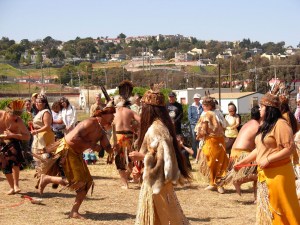 production in line with what the earth can provide.  Additionally, many proletarian movements ended up re-building capitalist society and its oppressive state rather than “withering away” towards a stateless and classless communism.  These revolutions ended up becoming more like their original capitalist enemies than they did become more like their communal ancestors.

The remains of native ancestors buried at Glen Cove constitute a sacred site, material proof that generations have walked before us, that we owe a debt to the legacy of our predecessors, and that our own future is rooted in the past, that a rift between life and death is imaginary. The ancestral remains at Glen Cove not only represent a beautiful past, but illuminate our destiny as well: a new communism; the application of the first nations’ principles synthesized with the Marxist dialectic, the revolutionary critique of capitalist society.

It might strike some people as a distortion of both native spirituality and Marxist scientific socialism to assert that the communism of the future is in any way connected to struggles like that for Sogorea-Te. In fact, Marx himself closely studied Iroquois and other societies for insight into what stateless, classless culture could be. The philosopher who reintroduced the dialectic into Western though, G.W.F. Hegel, drew his famed “master-slave dialectic” from the revolutionary struggle of African slaves against French masters in Haiti in the 1790s, a struggle that occurred at the same moment that the Ohlone, Pomo, Miwok, and other California “primitive communist” societies were being dispossessed of their land through the process of “primitive accumulation.”

The struggle of communism vs. capitalism has a long history in California and other colonized lands.  Let’s be sure to integrate the wisdom of native people into a holistic communist program for 2012.

8 responses to “What Communists Can Learn From Native Struggle: Sogorea Te and Primitive Accumulation”