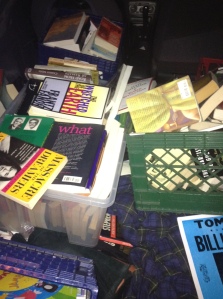 Today’s library occupation, like the Lakeview Occupation of July, demonstrated a powerful tactical approach towards building radical connections outside of activist circles.  In both cases, radicals initiated bold actions without asking permission but from the beginning were organizing to involve the folks directly affected.  Even in the first day of the Victor Martinez library, parents were already dropping of their kids to garden, a family from two blocks away donated crates of books, and curious people from the neighborhood were dropping by to show support and borrow literature.

Here are some of the basic components of what went down: folks occupied the library, erected banners, and brought in palettes of  radical literature.  But this wasn’t all they did in the brief time of the library’s new existence; in addition to these basic logistical tactics, the organizers also put out a press release, went door-knocking in the neighborhood to inform and invite the community, and built a gardening program that invited youth to come and develop the blighted space.  Without the support of the folks around, there’d be little defense against the constant narrative onslaught from the bourgeois media that radicals in Oakland are isolated and dwindling.  Instead, the Lakeview Occupation and today’s Victor Martinez library show a strategy that defends against that attack, building strength in radical unity with people’s hostility to austerity measures. 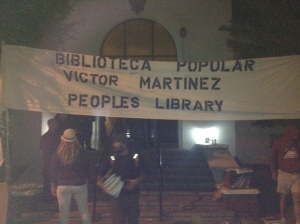 banner in front of library – see pigs in background.

Taking over abandoned buildings – empty libraries, closed schools, abandoned health clinics – amount to seizing the means of social reproduction.  What does this mean?  Schools, libraries, public transportation and health clinics are all institutions that reproduce our ability to live in society.  Under capitalism, these institutions reproduce all types of racial and gender divisions, and are constantly destabilized by being underfunded and shutdown at the state’s whim.  Taking over the institutions and running them in the interests of working class communities, and especially communities of color, marks a direction that our movement should continue moving in.  At the end of the day, the occupations that have occurred in squares across the country, and most recently in the Bay Area with the Albany farm occupation, the Lakeview occupation, and now the occupation of the Victor Martinez library, are indications of what we must continue doing: taking over the buildings, machines, and infrastructure that we need to run society in a totally different way.

But we should act without illusions: none of these occupations will last for long, or become new alternative institutions.  Where we’re at right now, with the left small and little-connected with the working class, and mass resistance to austerity few and far between, we don’t have the forces to keep the cops out.  This isn’t Greece yet, as inspired as we are by the brave revolutionary people there.  These actions are not the beginnings of base areas from which revolution will be launched – they are attempts to make the electric connection between deep resentment towards the withdrawal of what people need, and the idea that we have the right to take what should be ours. 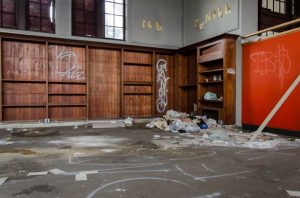 The library before organizers cleaned, decorated and stocked it with books. Photo credit: Indybay

Ultimately the state crushed us tonight.  We were forced to retreat and pack all the books up into milkcrates and take them to each other’s homes for the night, until we can bring them together over the next few days and determine next steps.  As we walked to our car with the crates full of books, some of the neighbors were peering out from behind their fences, cameras in hand, saying, “you’re just gonna leave like that?”  One comrade’s response was, “we don’t have forces to fight.  Sometimes these things pop off, and sometimes they don’t.  It depends on what people who live here want to do to defend the takeover.”  We need to continue these conversations with working folks in oppressed communities and chart a new course toward escalating these types of seizures and transformations of abandoned property.  Eventually we need to develop the type of proletarian cadres among communities of color who can advocate to their coworkers that they should come down and support these actions.  Beyond this, we look towards a time when working people are willing, able, and ready to take over their workplaces and begin running them entirely differently.