John Reimann, a veteran Trotskyist, wrote a solid response to the union question. This being posted in the spirit of trying to get every left group, in the US, Trotskyist, Left-Communist, Ultra-lefts, Anarchists, to write out, and define how they see revolutionaries relationship with unions. John Reimann, a leader of a 1999 wildcat strike of East Bay carpenters, is also very active in the Bay Area regarding social movements, and union struggles.

I think this sort of discussion/debate is a huge part of what has been lacking on the left, especially holding this out in the open.

As far as the unions: I think we have to start by looking at the objective developments and what mood and consciousness that created.

The 1930s and then again the strike wave of 1946 taught the US capitalist class a lesson: They could not simply steamroll over the working class as they had been accustomed to doing. So they retreated to trying to stabilize class relations. This was made possible by the post war economic boom and the dominant position of the US capitalist class globally. They were easily able to afford concessions. 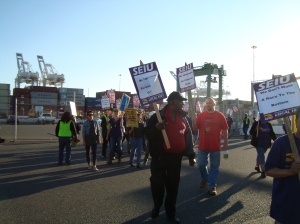 There was also the role of Stalinism, which gave “socialism” a foul odor in the nostrils of the great majority of workers.This enabled a sector of the union bureaucracy that was most closely linked with the employers to strengthen their base in the unions and strengthen their grip on the union structures. Any worker who seriously wanted a more militant union was suspected (at the very least) of being a “Commie”, and there were consequences, the least of which was being shunned by one’s fellow workers.

Ironically, the end of the boom and the collapse of Stalinism actually strengthened this state of affairs. The collapse of Stalinism strengthened a huge propaganda wave in favor of the “free” market. We had reached the end of history, you see. Any thought otherwise was simply living in a dream world at best. And the end of the boom accelerated the attacks on the working class, including accelerating the wave of plant closures and runaway plants (to Mexico and then to China and elsewhere). Workers in general, and the union workers in particular, were told that if you fight for higher pay, or even if you fight against cuts in pay, you will end up losing your job altogether.

Then there is another factor: Historically, the most militant and class conscious sector of the working class is the industrial sector. That was certainly true in the US in the ’30s. This is the sector that most strongly tends to carry the traditions of the class struggle. However, that sector was decimated, not only in the US but in the West in general.

It was exactly here that many of the attacks against union workers was felt the most, for example in steel and auto. In auto in particular, there was a pretty widespread struggle against concessions, but in almost every single case they were unable to convince the majority of workers to vote against concessionary contracts. I think the reason was two fold:

First, they had no strategy for countering the job losses. They never put forward a strategy for organizing the unorganized plants nor for how to link up with the auto workers in other countries. Thus, the majority of auto workers felt that their only options were to accept cuts or lose their job entirely.

But this reflected a decline in the consciousness in general. Almost all the old traditions have been lost. The near total collapse of any socialist current within the working class has meant that, among other things, there is a general mood that it’s not up to us as individual workers to figure out what has to be done and to take an initiative and organize it. And after all, why should we? There is no percentage in organizing to buck the entire union leadership, with all the repercussions that follow, if all you are fighting for is a few more dollars on the pay check. Better to spend your time and energy studying and playing the stock market. Of course, I’m being ironic here, but the point is that in general the main driving force behind being a union oppositionist is seeing that this activity is involved in a wider struggle to transform society. And that vision has been decimated, until recently.

I think there are a few conclusions that can be drawn from this view:

First is that the collapse of the revolutionary left, and its extreme weakness inside the unions is first and foremost a result of objective developments. The problem is that that many in the revolutionary left became disoriented by those developments. Some adapted by making their peace in one way or another with the union bureaucracy. They disguised their links with the union bureaucracy by being the most active members, but it is activity without organizing around opposing the perspectives, program and strategy of the bureaucracy/hierarchy. Then there are others who conclude that the dangers of getting caught in that web are so overwhelming that the best thing is to simply stay out of it altogether. I’ve met several people of this view who then turned right around and became part and parcel of the official leadership.

The third way is to be active in the union but with a perspective and program. Whenever a small step forward is taken, support that step and clearly point out what this step implies — what is the next logical step that has to be taken. Support strengthening the union, but explain that the role of the official leadership in general leads in the opposite direction. Oppose concessions, but explain what such opposition means.

We cannot escape the role of the union officialdom. We saw that in Occupy Oakland, for instance. There, when it became clear that it wasn’t going away anytime soon, a layer of that officialdom got involved in order to ensure that the radicalism of Occupy didn’t infect their members. (It was really a shame how quickly even a layer of the anarchists jumped on the officials’ bandwagon.)

But there is another conclusion: While the mainstream unions still remain by far and away the largest and most powerful organizations in the US working class, and while they have the strongest traditions within the working class, we have to accept that they are extremely weakened not only in numbers but also in terms of how present they are in the consciousness of millions of workers. Many, maybe even most, union members, for instance, couldn’t even tell you the name of the union to which they belong. (I once worked with a young carpenter who thought that the AFL-CIO was a new football league!) Whenever a big mass of workers determines that they simply cannot take it any longer, that they absolutely have to overcome all obstacles and rise up, given how the official channels of the unions are so blocked off, in many cases it may be that these struggles are carried out outside these official channels. Isn’t that exactly what happened with the South African miners? Once started, whether it be inside the mainstream unions or outside or some of both, such a struggle will have an impact within the mainstream unions and will draw all sorts of workers into activity. But we have to prepare for all of this.

I don’t think there is any one rule for whether revolutionaries who are union members should be active in their union. So much depends on their particular situation and the particular situation within their union and their work place. And what may be valid for one time can change overnight as the situation changes. But I do think that the above understanding and perspectives should be borne in mind, whether a revolutionary is active in her or his union or not. And definitely in this period they shouldn’t take an appointed, paid staff position with the bureaucracy/hierarchy.