As our organization expands to include workers from different sectors of industry, we are forced to understand and clarify the terrain in which we are organizing in.  Below we are posting a new series that will focus on the health care industry and prospects for communist intervention in the Bay Area.  Through an analysis of our local region, we wish to draw out the broader implications for organizing the rapidly expanding health care industry.  We encourage our readers to comment on the questions raised so as to deepen our understanding of the complexities of workplace organizing in health care!

To give some scope to this industry, in California, non-profit hospitals account for 61% of total patient days excluding state psychiatric hospitals.  Profits are just as large.  In 2010 alone, the top two California chains, Kaiser and Sutter Health, together made net income of $2.18 billion.[1]

This led us to two questions:  How do nonprofits make profit, and where do the profits go once they’re made?

How does a “non-profit” hospital make profits?

A huge amount of non-profit hospitals’ profits come from state subsidies and benefits. These benefits include being exempt from state and federal income taxes on profits, property taxes, and almost all sales taxes.  In return, these hospitals are supposed to offer charity care to those can’t afford it.  It’d be reasonable to think that the tax credits given and the charity care returned should balance out so that these institutions are actually non-profiting.  The joke of an exchange that exists in reality is shown in the following chart, courtesy of the National Nurses United research group the Institute for Health & Socio-Economic Policy. 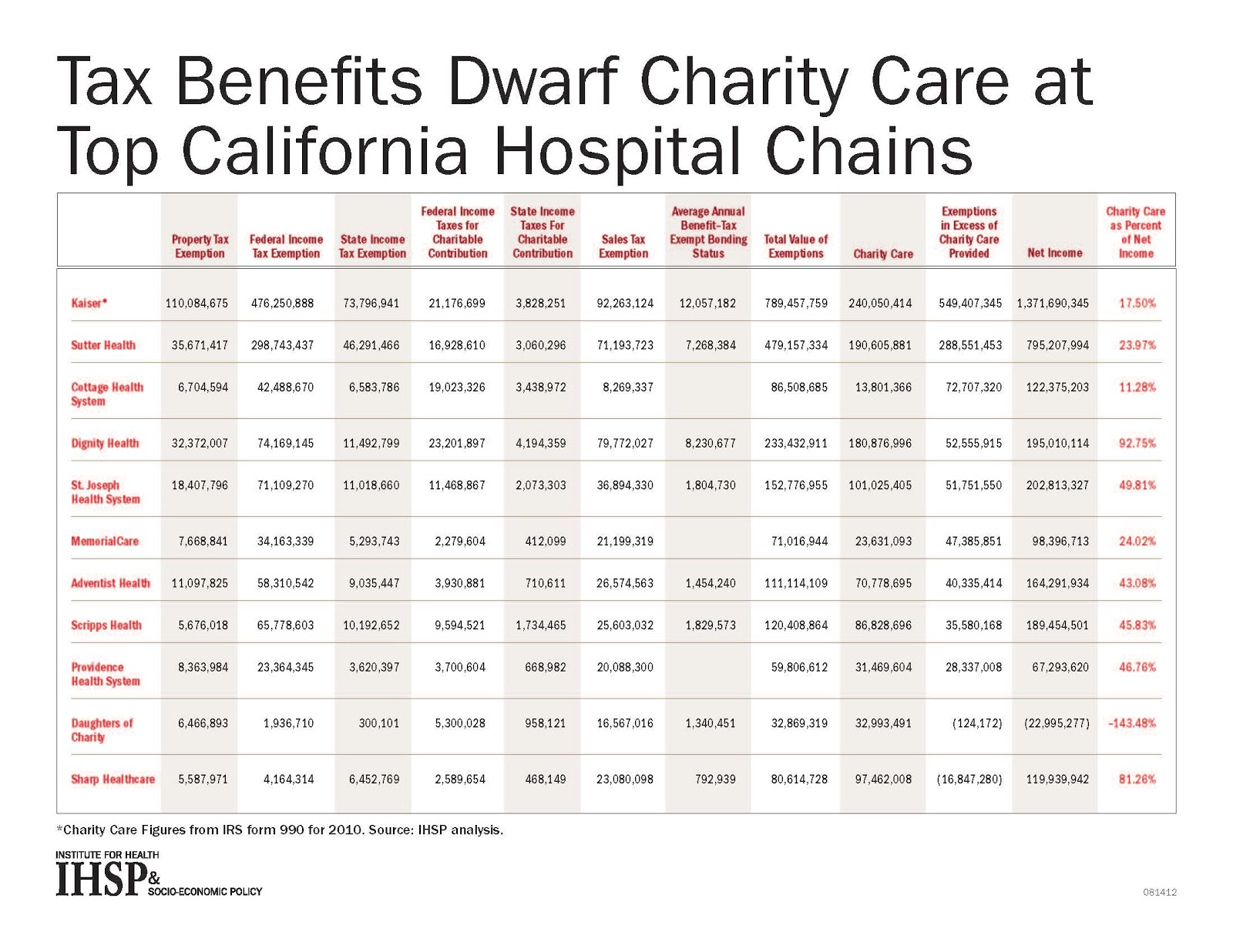 Most glaring: Kaiser earns $550 million from tax exemptions in excess of charity care given and Sutter Health $289 million!  These are enormous subsidies given to enormous corporations.  If they were for-profit companies, on the Fortune 500 list Kaiser would rank #139, Dignity #249, and Sutter #254.

Like many profitable companies, the supposedly non-profit Sutter Health preserves its profits through frequent attacks on their workers’ wages, working conditions and benefits.  The last few years have seen repeated strikes by Nurses and techs at East Bay Sutter hospitals, and this month it started up again with a CNA strike threat in response to an announced layoff of 358 staff in Berkeley and Oakland.  The type of attacks vary, but generally are a war of attrition against the high living standard California nurses have fought for.  In every case, Sutter claims that the hospitals are in the red, but over this same period of time the Sutter network was recording $735 million in profits, a 15.9% jump from 2011.  Over the same time period they also invested $1.1 billion in capital projects, meaning expanding and refitting their hospitals, as well as building two new SF facilities.

Whether the Berkeley and Oakland hospitals are actually in the red, or being looted for both extra network-wide profits and an excuse to make layoffs, we are still researching.  The healthy profits and investments made by Sutter during this same time period show that they’re nowhere near being financially incapable of running unprofitable hospitals for community benefit.

But isn’t the purpose of nonprofit status to help community benefit organizations dedicate their budget to serving those who can’t pay?  Theoretically yes, but as detailed in the IHSP report US nonprofit law has been watered down from even its weak 1950s original form.  Even with this watered-down law, Sutter recently faced a class action lawsuit for violating its nonprofit status by providing little charity care and charging inflated prices to uninsured patients.  In fact, in a NY Times article last month a health economics professor described Sutter as “a leader — a pioneer — in figuring out how to amass market power to raise prices and decrease competition.”

What does it mean for a “non-profit” hospital to earn profits?

We don’t fully have the answers to these questions yet.  After all what can a non-profit, which is not legally supposed to distribute returns on investments, do with profits of $1.4 billion (Kaiser) and $800 million (Sutter) in one year alone (2010)?  Or put another way, how do capitalists launder billions in profits that aren’t legally profits?

Our best guess for the rest is that Kaiser must launder a large amount through its for-profit wing… but to where?  Possibly we’re also missing something in the complicated–and often corrupt–world of capitalist accounting and maybe a large part is being reinvested in the arms race to build bigger and better hospitals.  At this point, though, your guess is as good as ours.  Although nonprofit hospitals and other companies normally try to keep their money flows private, we believe we can get a better handle on the information that’s available.  So please, dear readership, help us solve the riddle of profitable non-profit hospitals!

[1] Unless otherwise cited, data in this article are drawn from the research summary Benefiting from Charity Care: California Not-for-Profit Hospitals