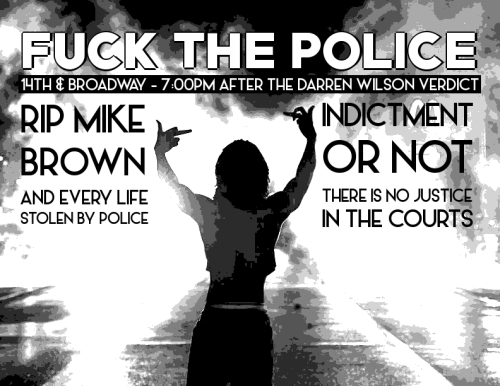 On the day of the verdict, whether or not the grand jury decides to indict Darren Wilson – the cop who killed Mike Brown – we will be out on the streets at 14th and Broadway at 7pm. We do so to show our solidarity with Mike Brown  and the militants of Ferguson, who withstood the brute force of the state while bravely fighting the white supremacist power structure that treats black life as disposable.  Their actions have inspired a movement all across the country and the world to challenge the daily oppression faced by black and brown working class people.

Whether or not this cop is indicted won’t change the repressive nature of the state and capital, but what this tragedy has shown is the revolutionary potential of concerted action in the street.  The militants of Ferguson have  directly faced the state, have rejected community and business leaders’ calls for pacification, and, when the cameras left, continued to do the intensive community building to keep the movement strong.  But where will they and the national movement against police brutality go from here?

The experience in the Oscar Grant struggle has shown the need for an organized struggle that moves beyond merely reacting to moments of outrage and court dates, and develops a sustained movement and organization of black and brown proletarians that can challenge all instances of police brutality that occur in our city and beyond.  This isn’t done by pandering to the state and it’s courts, non-profit leaders, self-appointed community leaders, or the “business community,” but by developing a revolutionary organization composed of working class militants who are steeled in the day to day struggles in the streets, their communities, and their workplaces.

When a black life is lost every 28 hours by the hands of cops and racist vigilantes, when stop and frisk is becoming the new normal, when prison populations are overflowing with black and brown people,  families broken up by deportation, and jobs are few and far between, this movement seems more relevant then ever.

Below the jump, check out a dope track entitled War Cry by Tef Poe, a rapper who has been on the front lines of the struggle in Ferguson.  This is sure to be a protest anthem.  See you in the streets..

END_OF_DOCUMENT_TOKEN_TO_BE_REPLACED

Get up! Get down! Fast food workers run this town!

Oakland, CA – On September 4th, 2014 at 14th & Broadway, a key site for the Oscar Grant rebellions and Occupy Oakland, fast-food workers and organizers were arrested after rallying and protesting for $15 an hour and demanding unionization of their workplaces.  This was part of a national day of action. This day of action was the 7th strike since this campaign started in Chicago 2012 by SEIU and other political forces, with 150 similar protests taking place in major urban cities.  Through polls and other media forms, the public has shown serious support for higher wages in the fast food industry, thus opening the possibility of a public and political campaign to organize fast-food workers. Consequently, in the 1 year and 10 months since its inauguration — this effort has generated notable worker actions with repression mostly kept in check. Working off of the Fair Labor Standard Act of 1938, the campaign utilizes many legal avenues and creates favorable conditions to breathe class struggle life into the fast food workplace, potentially opening windows for thousands of these workers to be armed with a ‘politics of struggle’ in the workplace. The combination of advocating unionization of the low-wage workplace through direct action, and publicly fighting for a higher wage can be a functional framework for getting working class struggle off the ground. Not surprising, raising the minimum wage to $15 an hour has been a position generating national momentum. These positive developments still face the politics of the campaign and its organizations. Service Employees International Union (SEIU) is a central political force of the campaign, and in short has built a movement set on union expansion that subordinates the potential working class power in the workplace.       END_OF_DOCUMENT_TOKEN_TO_BE_REPLACED