No to the Democrats, the Spearhead of Attacks on Public Education and Teachers Unions

Even leftists and revolutionary minded people who are critical of Bernie Sanders have put forward the idea that, despite his limitations and the problems with his politics, he’s still defending the public sector mor 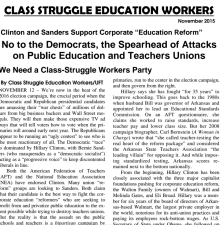 e so than other presidential candidates. However, this position fails to take into account Sanders’s position on standardized testing, punitive measures against public school teachers, and the fact that he has in various ways supported both Bush’s No Child Left Behind and Obama’s Race To The Top education policies. We present the Class Struggle Education Workers leaflet critiquing Bernie Sanders and Hillary Clinton’s positions on public education because it concisely presents the problems with their positions. Click image for newsletter.

This entry was posted in Debates, Flyers, News Analysis, US Labor. Bookmark the permalink.