We continue to share reflections and analysis on the recent student protests in the Bay Area.

The #BlackLivesMatter movement and the movement against police violence has taken on new forms, and has now spread to schools as sites of potential power. Students have held large protests and shutdowns at Mizzou and Berkeley High that have garnered national media attention, but there have  also been smaller struggles that have gained less notoriety but are equally as important for militants to study.

These small movements show us new forms of organization that emerge in response to police murders, how students are coordinating these protests, how local histories influence the forms of struggle that take place, the role of Black leadership, how multi-racial solidarities emerge, how students are pushing the boundaries of what the #BlackLivesMatter movement means, and what the limitations may be.

Communist militants must grasp these events on their own terms in order to better understand how the student’s rebellious energy can deepen and spread to other sectors of the economy and to broader layers of the class.

One such event occurred last month, when students at Castlemont High School, in deep East Oakland, held protests and walkouts in response to the police murder of Richard Perkins, Jr. at a sideshow. In order to document the emergent student movement in the Bay Area, we have interviewed a number of students at Castlemont High and we provide our reflections below. Please read, critique and share! 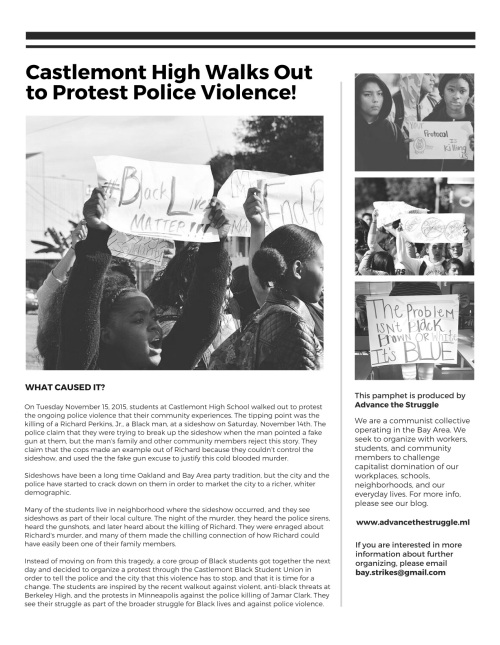