To the Budget Cut Movement: No More Ignoring State Violence

The anti-budget cut movement and struggle for public education in California over the last year has inspired worldwide resistance, and has brought in a lot of new people who have never organized or been political before. The March 4th movement provided an outlet for people to get involved and educate themselves about the budget cuts; it also created a base to build off for the next cycle of struggle. Since March 4th conferences have gone down and a new date for mass action has been picked: October 7th… but will October 7th be qualitatively different than March 4th? Will more sectors of society be brought in? Will struggle deepen and become more militant? As the economic crisis deepens and affects more and more people internationally, there is a real need for a militant perspective examining why the budget cuts are happening, who is causing them, and who is suffering from them.

So far the education sector has largely lead resistance to the cuts, on college campuses specifically, but these cuts go far beyond the universities. It is not just education that is being destroyed; social services, such as free and/or affordable healthcare are being cut; there are massive foreclosures and a lack of affordable or public housing; unemployment remains high. Anyone can see that these cuts aren’t just affecting students, but the working-class as a whole. While all these cuts are happening in the public sector the top corporations and banks were immediately bailed out by the Federal Government as soon as their financial instruments evaporated in the bubble pop. If it wasn’t clear to you before that this system was based off of exploitation and a class divide between the rich and the poor, massive bailouts to the capitalists and bankers while we are left to struggle for the basic necessities of life should make it clear.

These budget cuts are also occurring during a time period of massive state violence to communities of color and queer people; the passage of the anti-immigration bill SB 1070 is causing and supporting more profiling of immigrant populations and ICE raids; the Oscar Grant movement has exposed the police’s continual assault against Black women and men that stems from the days of slavery; and there is consistent harassment and murder of queer and gender oppressed people. Is a budget cut struggle solely confined to defending education enough to really fight the cuts and the crisis? Is it enough for the people most affected by it to be brought in? No. We need a larger analysis that identifies the true enemy, the capitalist system, which relies on other systems of oppression (patriarchy, racism, & homophobia) to target and discipline people of color, women, and queer folks to keep divisions within the class that makes uniting and resisting harder.

END_OF_DOCUMENT_TOKEN_TO_BE_REPLACED

Forbes: Obama not a Socialist, More like an Oligarch

Just another example of the fact that business news publications tend to be the most honest (they speak honestly to their constituency). Forbes editor Michael Maiello’s newest column proclaims:

Obama’s no socialist. An observer from Mars would think the man’s a downright oligarch. While the “angry white men” movement assembles into tea parties, the real anger should be felt by those on the left who have so far watched the president continue to follow an economic rescue plan that was outlined by George Bush and Hank Paulson. The only thing that Obama has socialized are the losses incurred by Wall Street’s major banks….

Yeah we’d say that’s pretty right on. Obama’s brand of socialism involves foisting the burden of Wall Street excesses upon the people to share, while privatizing profits made by Wall Street Execs (who still continue to receive bonuses…)

Again, it is important to point out that Obama is incapable of bringing any kind of real change because its the system that needs changing not its leadership. Power should (and could) be in the hands of the people, that would be real change. However that kind of change requires much deeper and qualitatively different struggle. 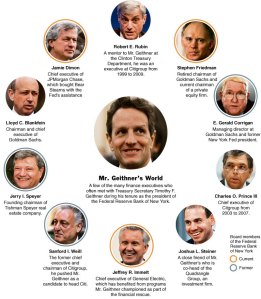 Tim Geithner and his Capitalist Cronies

For all the progressives that drank Obama’s Kool-Aid: Who’s Obama’s real constituents?

1. A year before he was elected Geithner shocked then-Treasury Sectretary Henry Paulson with a proposal “to give the president broad power to guarantee all the debt in the banking system”. Paulson was shocked by the proposal, seen as audacious and “politically untenable” because it would “put taxpayers on the hook for trillions of dollars”.

A year later, Geithner’s proposal has been implemented almost entirely.

For those who thought Obama was going to usher in all this radical progressive change, one can only ask… What were you thinking?

The only thing that can defeat the bankers is class struggle. The working class vs. Geithner, Obama and the rest of the Capitalist ruling class.