Riots, Freeways, and BART Stations: Reflections on How We Attack White Supremacy

This reflection was written by a comrade of the Advance the Struggle crew on November 29th, a day after the Black Friday shutdown of the West Oakland BART Station.  It was not published because it provoked some internal debate and discussion within our crew that we wanted to have prior to putting it out online.

We offer it here in its rough and unfinished form as an artifact of what some of us were thinking of in the beginning of the national rebellion against the non-indictment of the police officers who killed Michael Brown and Eric Garner.

Riots, Freeways, and BART Stations: Reflections on How We Attack White Supremacy

The police execution of Mike Brown is not simply another example of black youth experiencing a state sponsored murder.  In addition to the tragedy of another black life stolen by the white supremacist state, Mike Brown’s death has called into being a nationwide movement against police brutality.  This movement has further impressed upon many people’s consciousness the delegitimization of the state that the murders of Oscar Grant, Trayvon Martin and others have left.  Further, the rebellions and direct actions that have been carried out by individuals, communities and organizations have demonstrated an expansion in the repertoire of resistance tactics that new and experienced militants are willing to carry out in order to disrupt the white supremacist capitalist economy and its racialized state.

So far, the two main forms of militant action that people have taken have been street rebellions characterized by informal, decentralized and evolving leadership structures as well as targeted direct actions featuring highly organized, formal and centralized leadership structures.  The rebellions that happened in the streets of Oakland on the the three evenings after the announcement of the non-indictment of Darren Wilson were examples of the former, while the Blackout Collective’s shutdown of the West Oakland BART Station is an example of the latter.

Both sets of actions were successful in disrupting sections of the economy during the holiday season, inflicting high value damage to a capitalist economy during its peak season.  Further, both actions played a role in developing the leadership capacities of young black militants, and secondarily other militants of color and white militants, though in very different ways.  Reflecting on these experiences may help us to begin thinking through how we can build upon the successful acts of resistance we’ve taken, and move forward together in continuing our organizing operations.

END_OF_DOCUMENT_TOKEN_TO_BE_REPLACED

Race, Identity, and Solidarity in the Fight Against State Violence 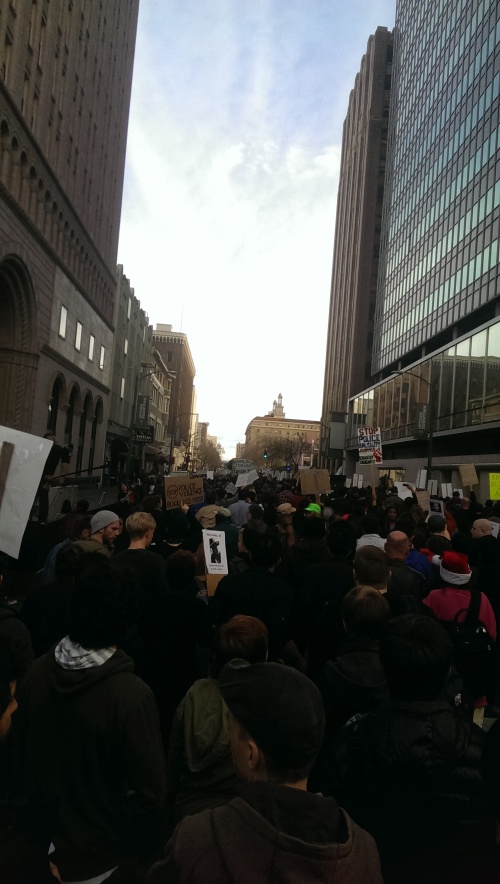 The Millions March, a national solidarity event with the Black Lives Matter movement that took place on December 13th, compels me to address the political dynamics of that nationwide event in order to open a dialogue about the objectives and tactics of the movement.  At the beginning of the march, one of the leading speakers called on White Allies of Black people to refrain from speaking on the bullhorn and from marching at the head of the protest; the purpose of this rule was to ensure that black and brown voices were emphasized throughout the march – a theme that was present throughout the march and throughout this movement as a whole.

When we arrived at the Oakland Courthouse, the leaders urged black and brown protesters to stand together on the steps leading to the courthouse and for white protesters to remain at the bottom. When the list of speakers was over, the lead speaker of the march implied in her words that the march was over and that people should head back to the site of the initial convergence to engage in Healing Circles. As the mass of protesters began to move, a black protester announced to the marchers that the march was not over. Indeed, the majority of protesters remained on the streets of Oakland hours after the spectacle at the courthouse.

Now – let’s pause for a moment and rewind three weeks to November 24th, 2014 – the night of the non-indictment of Darren Wilson. On this night we also experienced a powerful display of black, brown and multiracial solidarity; this night, however, was slightly different than the Millions March.  People, more or less spontaneously, filled the streets the night of November 24th; during the beginning of the rally on 14th and Broadway, black protesters lead chants of “Black Lives Matter” while people danced in a circle; electricity filled the air as protesters carried out an unpermitted march from downtown Oakland to the 580 Freeway entrance on the north side of Lake Merritt; at some point in the evening, a brave group of young people took over the 580 Freeway, blocking the westward flow of traffic.  The people who carried out this first freeway blockade were a mixed racial group of people; black protesters were certainly represented in the mix, contributing to the dynamism of the action; brown, asian and white protesters also filled the gravel laden lanes of the highway.  All protesters were clear in their messaging: black lives matter, and police violence must end.

Our intention is to explore the way in which movements such as that experienced by us in the winter of 2014 can contribute to the development of a revolutionary situation in the US; further, we see the questions of racial empowerment, identity and solidarity to be of central importance in building movements against state violence and building revolutionary organizations.

END_OF_DOCUMENT_TOKEN_TO_BE_REPLACED

We wanted to share this great video that has footage from multiple marches in Oakland over the course of 2 weeks.  It really captures the dynamism of the past few weeks.  We are still working on the finishing up some pieces for our series reflecting on the last few weeks of mobilizations, so keep checking back!  Video after the jump. END_OF_DOCUMENT_TOKEN_TO_BE_REPLACED

An independent grouping of students and school workers came together to organize an action against police violence.  Young people of color are constantly surveilled and harassed by police in their communities and schools, so it’s inspiring to see a spirited action done in a militant and structured way.  Our friend John Reimann has produced this video of yesterday’s action, which you can see after the jump.  We will be sharing more strategic reflections on the organizing involved in this shortly. Enjoy the youth energy in the meantime. END_OF_DOCUMENT_TOKEN_TO_BE_REPLACED