Posted on August 29, 2012 | 2 comments
We received this flyer from comrades who have been distributing it to workers in San Francisco.  The SF-MTA is currently taking the money they’ve received from selling advertising space on MUNI buses and donating it to the 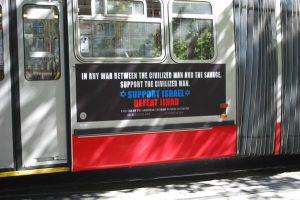 Human Rights Commission.  While this attempt at liberalism is appalling, what we should be focusing on is finding the instances of workers struggle on the shop floor.
If what follows is any indication of what is possible (or what is already happening) then we should be keeping our eyes open for workers taking direct action against being exploited as proletarian bus drivers AND now as movers of portable Zionist propaganda.  Additionally, we should pay attention to Arab, Muslim, and Sikh workers who are struggling on the shop floor – particularly in the custodial sector in San Francisco.  International solidarity must – and already is – going beyond symbolic statements and becoming a material force where workers refuse the alienation of work and the imposition of Zionist propaganda and symbols within the labor process.
Props to comrades for putting in the work – intellectually and on the streets.

A Classwide Appeal in Response to Racist Ads on MUNI

It is time to view attacks on workers and oppressed populations not as isolated events, but as calculated measures in maintaining the rule of the global ruling class. We must envision strategies for fighting back that put us not in categories of victimization, but in solidarity with the international ranks of the working class. City expenditures on ads and public relations campaigns exceed millions of dollars, yet they enforce austerity and tell us they will close down our public schools and take away our benefits. The historical moment demands we respond to these attacks on a class-wide basis! Riders, drivers, students, and workers across sectors and communities must unite!

Racism on MUNI and the class-wide support we need

SEIU Local 87, a service workers union, is devising a new contract with the ABM Corporation, in which basic benefits are being jeopardized. In the last couple weeks, rank and file leaders have stood up against these attacks and even been arrested in civil disobedience. Many janitors involved in this union are from the Arab community. Unveiled last week, SFMTA approved MUNI ads, paid for by Pamela Geller and the American Freedom Defense Initiative to run on the side of our city’s buses. These ads come at the time that we have seen numerous hate attacks targeting Arabs, Muslims and Sikhs; there have been at least 8 incidents in the past 10 days across the country. Last week, after the second attempt in a month, an Islamic Center in Missouri was burned down. In the same week, four days after US congressman Rep. Walsh proclaimed in a public speech that “radical Muslims are trying to kill Americans every week”, a Mosque in a Chicago suburbwas shot at with a high-velocity air rifle while 500 worshippers were insidefor evening prayers during the Holy month of Ramadan. On the same day this advertisement ran on San Francisco buses, a mosque in Ontario, California found the limbs of a dismembered pig on the building’s front steps. And right here in the Bay Area, this past Thursday marked the fourth time in the last eight months that a Hayward mosque was targeted by vandals, this time resulting in one person injured. The ads on MUNI read:

Today, MUNI drivers are exposed to draconian disciplinary measures like security cameras on the buses and threats of firing for taking a certain number of sick days or breaks even if it falls well within the quota outlined in the contract. The practices of management attempt to control resistance and create a culture of fear that has its roots in 1976 when workers organized in response to the City’s attempt to take away their right to strike.