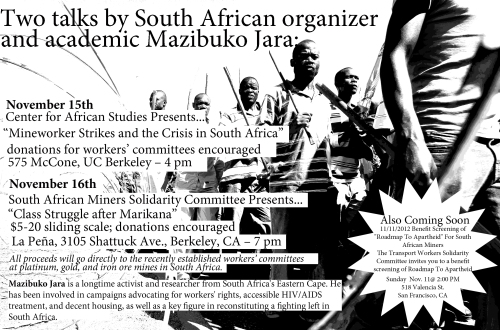 You’ve probably heard about the class struggle unfolding over the past few months in South Africa. An unprecedented wave of wildcat strikes has all but shut down much of the mining sector since August, with workers resisting wage cuts, layoffs, and hyperexploitative working conditions. When the South African Police Service massacred 34 strikers in broad daylight, the workers were not deterred; instead of backing off, the strikes spread across the entire mining sector, with iron ore and gold miners joining their platinum mining comrades in struggle against the multinationals that own and profit from these oppressive conditions. Now the struggle has spread into Namibia, Botswana, the Western Cape, and elsewhere, and strikers have self-organized workers’ committees across the platinum belt.

So what does all of this mean for class struggle in South Africa? How are these workers’ committees being organized, and why is this (as the Financial Times recently claimed) potentially the most effective strike wave to hit South Africa since the demise of apartheid?

Mazibuko Jara, a long-time organizer from South Africa’s Eastern Cape and one of the founders of the Democratic Left Front, will be giving two presentations on this new wave of class struggle:

On Thursday, Nov. 15, he will be speaking at a forum organized by UC Berkeley’s Center for African Studies at 4 pm (575 McCone Hall). While admission is free, we highly encourage people to make donations to the strike fund for these unprotected workers’ committees. Please give generously; every last dollar will help prolong this struggle.

On Friday, Nov. 15, Mazibuko will be speaking at La Peña in Berkeley (3105 Shattuck Ave) at 7 pm. Admission is on a sliding scale of $5-20, but please give as much as you can: every dollar raised will go to the workers’ committees. Additional donations are highly encouraged.

We hope to see you at one or both events. A luta continua! Forward to a living wage for all workers!

Blood Shed of the Innocent – Sounds of the South 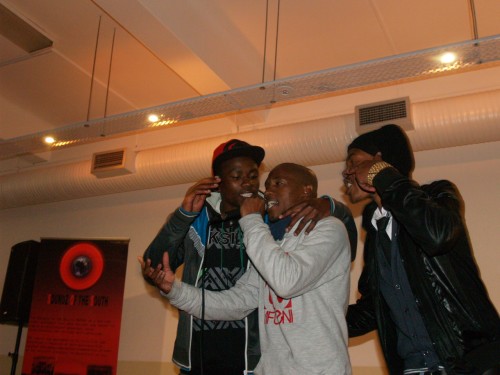 Artists from political hip-hop collective Sounds of the South

With the chorus of ‘eighteen years and we’re still the victim’ this song from political hip-hop collective Sounds of the South represents in English and native tongues the hypocrisy of the post-Apartheid regime in South Africa. The African National Congress was a political party central to ending apartheid, making use of political strikes as one of its most powerful tactics. This tactic must be used here in the USA. But without a communist goal, all the best tactics in the world will loop back to capitalism and all its horrors.

Nelson Mandela was the first black president of South Africa under the ANC but its plain to see the dictatorship of capital still reigns supreme. The National Union of Miners has always been a pillar of the ANC, but today they work hand in hand with capitalists to put down workers’ righteous struggle. With our own black president, with our own popular “Democratic” party, and with our own sell-out unions, we in the US feel South African proletarian pain.

Dying for a Raise: Mumia on the Marikana Massacre 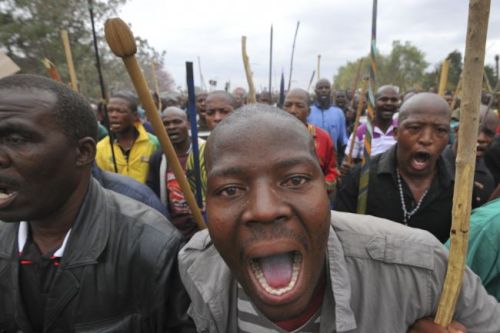 The Massacre in Marikina, South Africa, of striking mine workers has caused dismay and disbelief the world over.

Thirty four miners were slaughtered, and 78 others wounded by a hail of police gunfire.

How could this be in today’s South Africa?

How could this happen in a post- apartheid South Africa?

How could this happen in a predominantly Black government, led by the African National Congress (ANC)?

The spectacle tells the tale: black police, clad in blue overall uniforms, were called by the Lonmin Mine Co. officials, to stand against Black miners holding a wildcat strike demanding better wages and improved working conditions.

When they refused police orders to disperse from a nearby hill, the cops attacked them with automatic weapons fire.

Who do you think they worked for: their people – or the mine operators and owners?

Whom did they serve and protect?

And striking miners are dying for a pittance, while owners and investors are making billions!

The cops of capitalism serve those who can afford their services.

SOLIDARITY WITH SOUTH AFRICAN MINERS
Emergency Rally & Protest
Friday August 24th 2012 @ 5pm
Oscar Grant Plaza (aka Frank Ogawa Plaza)
Protest the murder of 40 striking mine workers by the South African Government.  Stand in solidarity with the mine workers as they continue their battle with the Lonmin Platinum Mine and the murderous government police force.  Workers in all countries must come together to resist these atrocities carried out by the state in the interests of International Capitalism.  As working class organizations we strongly believe that:“an injury to one IS an injury to all.”
We’ll see you Friday at 5pm. Thank you.
Initiated by Advance the Struggle in conjunction with the Oscar Grant Committee Against Police Brutality and State Repression. Please contact us if your organization would like to be included as an endorser: bay.strikes@gmail.com

From Oakland to South Africa,
one struggle, one fight!