As the struggle against austerity at City College of San Francisco heats up, this reflection by an Advance the Struggle militant attempts to spark a discussion on how revolutionaries relate to and broaden the horizons of anti-austerity struggles. It is not enough for us, as we build for resistance to budget cuts, to call for the mere “defense” of public education systems under a crisis-ridden and decadent class society; it is crucial we discuss how a conscious and organized worker/student/community movement can make concrete gains within the institution to begin transforming it into a base of ongoing struggle. Towards this end we put this out there.

The ACCJC, the accreditation commission pushing for a deep austerity program at City College of San Francisco, placed March 14th as the deadline for the college to “show cause”, i.e. prove why it should not be closed down. If the CCSF officials give in to the Commission’s blackmailing, the budget cuts would be implemented the Fall 2013 semester.

As of now, the forces resisting remain too small to defend the school, much less to mount an offensive and make gains. A large part of CCSF’s constituency is unaware that their school, along with their economic and social aspirations, are dangerously close to being destroyed and gutted by the ruling classes needs for higher profitability. For those who are aware, the prevailing understanding is that the City College system is inefficient, outdated, and bureaucratic, thereby implicitly supporting the ACCJC’s demands for an end to such “nuisances” such as the democratic control professors exercise in electing their chairs, Ethnic Studies courses, faculty salaries, and the (at most) semblance of “shared governance” between faculty/staff, students, and administrators. The Commission seeks to narrow the Mission Statement, increase the amount of administrators, and place extra resources into a reserve pool. The implications are that by investing less in the reproduction of students’ labor-power (many of whom already sell their existing labor-power at low rates in order to get through school), the rate of profit for the capitalist class might be higher; the end to any pretense of “shared governance” aims to destroy any future resistance to these measures. The Commission (ACCJC) is, like the CIA, in the business of fomenting bogus “crises” in public institutions that then justifies their authoritarian control and implementation of steep austerity plans.

The latest event was last Thursday, February 28th. Several hundred people lined up along the campus in support of the teacher’s struggle against wage cuts and lay-offs. Around the same time, the Board of Trustees held an open meeting at a nearby building, which several of us attended. At first, the Board aimed to keep public comment until the very end of their meeting, which was to last several hours and therefore make it impractical for most students and community members to speak out. After heckling from the crowd demanded public comment to be moved to the top of the agenda, folks lined up and spoke out against the Board’s plan to to acquiesce to the ACCJC’s demands. Some begged the Board for mercy while others addressed the crowd and called out the Board as the sell outs and agents of austerity that they are. The most radical speeches made it clear that an alternative existed to the budget cuts and that it’d take a serious and militant confrontation with the system to make it into a reality. 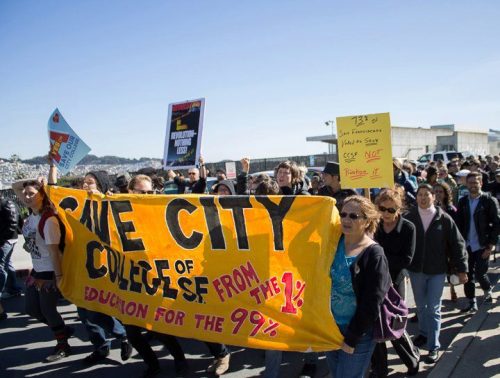 A massive amount of outreach needs to be done to win over a lot more people to the struggle. Teach-ins are being organized around the different campuses throughout these next two weeks. Our analysis needs to situate this struggle in the context of a global capitalist onslaught on proletarian living conditions and political organization, coupled with the many inspiring and insightful examples of resistance to this process, such as the student strike in Puerto Rico, Chile, Quebec, Bay Area 2009/10 and 1968, etc. Basically, we need a class war analysis that can polarize students, teachers, workers, and community members around common interests in both fighting this round of austerity, and turning the attack against us into an attack against the racist, sexist, capitalist system. If the small but emerging movement continues along the lines of pandering to the Board of Trustees or City Hall under the illusion that we are on the side same, we will not be able to harness the direct and militant political activity that emerges when people understand the actual causes of the problem and who their real friends and enemies are.