Art & Revolution: Thoughts of a young artist from East Oakland

Attached are a couple images of drawings as well as an image of a shirt that a young radical comrade has produced.  He’s chosen to remain nameless for security purposes.  Below is a brief statement from him about the connection between art and revolution.  We look forward to much more from this comrade. 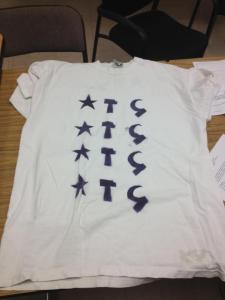 I made this shirt for the communist collective Advance the Struggle because I saw the communist symbol and recognized that it could easily be used to spell out ATS; the communist symbol is the mainlogo for the marxist/communist tendency.  It’s a good way to intrigue people; from an artists’ perspective, I think of logos and what people see the most; if you separate it (the hammer and sickle) and force people to have to think about it to get it then it intrigues people.

Art is an easy way to display what you think; it doesn’t have to be hella complex like in a text; art has been in movements throughout history and will always be . . . it’s an easy way of depicting a movement and a movement’s thoughts.  There is less censorship in art; the only censorship is your own imagination; you can use humor and irony; there’s a lot of freedom in art. 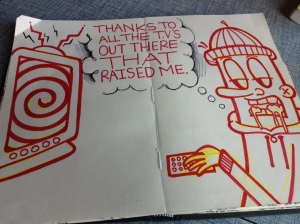 Even if it’s not explicitly political, it’s still political because it shows by the artists’ action that you’re going against the state; Graffiti is taking back space, it’s taking over occupied space that capital has taken over; Graffiti is showing love for our city and for the working class; we’re showing respect for ourselves by showing that we have the power to control our own city and our own space. 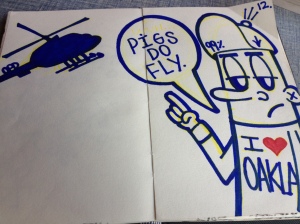