#HoodiesUp: All Out to the Justice for Trayvon Rally and Community Speak Out (7/15)

Here is a copy of the flier. Please Distribute far and wide!

Another Black youth murdered in cold blood, and the murderer, according to the courts, is not guilty! The case of Trayvon Martin is an example of what America is composed of, the racism that deeply penetrates its veins, and the state that overseas its process. Trayvon Martin was vilified by the courts as a thug, and its murderer was defended as a noble citizen. How many Black and Latino youth have to be victims of such violence? When will we build a movement so powerful that can challenge such violence? When will the working class be organized to shutdown the system when such racist violence occurs? These are the critical questions of the day. We have experienced the Rodney King movement, the movement around the murder of Sean Bell, Kimani Gray, Kenneth Harding, and Oscar Grant. Yet these murders continue unchallenged.

Our strategy against such murders shall be, in the short term, organizing militant protests when such verdicts are executed and organize the working class in the long term as preparation for such moments. Only until the working class, located in strategic industries, that shutdowns components of the system, will we see a viable movement challenging the system. In the Oscar Grant movement we experienced a wave of rebellions on January 7th, and January 14th, 2009, as well as ILWU local 10 shutting down the port on October 23rd, 2010. The combination of street rebellions and shutting down industry are effective tactics against the state. The state, a concentration of power, will not take anything seriously, until there is a force that challenges such power ascends in the field of political battle. Our history of struggles against police brutality has been paralyzed between disorganized bursts of anger coupled with nonprofit lead forces that channel anger back into the system.

We need a militant organized movement of the working class who utilizes its position in society against state supported racist violence. The racist nature of American society will never be challenged until the working class begins to shutdown the system as a political response. A political organization with such explicit aims is needed to accomplish such tasks. Now is the time to organize for justice.

END_OF_DOCUMENT_TOKEN_TO_BE_REPLACED 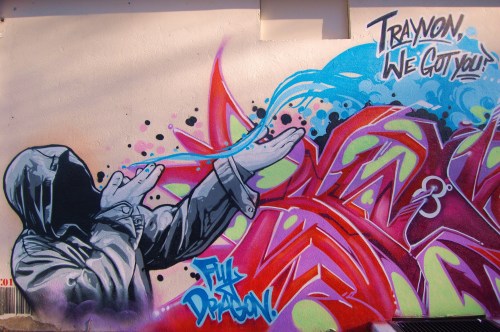 For the past week, I’ve been glued to the television screen watching as much as I can of the George Zimmerman trial. Accused of second-degree murder, the state of Florida is prosecuting Zimmerman for racially profiling and then shooting to death African-American seventeen-year old Trayvon Martin. Since those reading this will surely be acquainted with this infamous and racially-charged event, I will only briefly recount the happenings of that fateful night.

On the night of February 26th, 2012, Trayvon Martin was on his way back to his dad’s home in a gated town home community in Sanford, Florida, in the central part of the state. Carrying a bag of skittles candy, a can of Arizona iced tea, and wearing a hoodie on that rainy night, Trayvon Martin was walking through Zimmerman’s neighborhood as the latter followed him in his car, suspicious of the young man because of the color of his skin and due to a series of robberies committed in his area in the previous months. The prosecution holds that Zimmerman needlessly followed and then provoked Trayvon into a scuffle that ended in the teen’s death at the hands of Zimmerman’s pistol from point-blank range. The defense has an easier road to follow; while the state must prove beyond reasonable doubt to the jury (9 women, 8 of which are white) that Zimmerman murdered Trayvon with “malice” and “ill will”, all the defense team has to do is sow enough doubt in the case against their client and uphold Zimmerman’s theory of self-defense. They’ve done this with some success. They’ve poked holes and sought to deligitimize every prosecution witness from Trayvon’s friend Rachel Jeantel, who was on the phone with Trayvon during the initial stage of his confrontation with Zimmerman, to the Sanford police investigator of the crime, and the medical examiner who diagnosed Zimmerman’s head injuries as essentially insignificant.

The trial in itself is fascinating in the way in which the opposing sides meticulously scrutinize every detail of the situation to reinforce their story. The media outlets broadcasting the trial routinely take breaks in which commentators of various backgrounds chime in and give their viewpoints on how the case is proceeding and usually betray their sympathies for the defense or prosecution. The entire spectacle is fixated on the whether George Zimmerman legitimately feared for his life due to Trayvon Martin’s aggression and employed his self-defense right to “meet force with force” (as the Florida self-defense law dubbed “Stand Your Ground” Zimmerman claims to have based his killing on states.). The defense seeks to build up Zimmerman as an honest and trustworthy American who fell upon an unfortunate situation that required the use of lethal force. Several of the defense’s 18 witnesses know Zimmerman personally and went on and on about his concern for his community, his work with small children, etc., all in an attempt to influence the jury’s perspective on Zimmerman. This strategy, for the defense, implies framing Trayvon as just another street thug, a good-for-nothing criminal who asked for what he got. They’ve honed in on his tattoos as an example of that, although when Trayvon’s mother took the stand she told the defense lawyer Mark O’Mara during her cross-examination that those tattoos were in honor of her and his grandmother. The defense rejects any accusations of racism against their client as they employ typical stereotypes of Black men to slander Trayvon’s legacy and justify his death.