Sin Patron – The Workers Movement and the World Cup (Video)

We are happy to share this video from Ian Steinman, a comrade currently residing in Rio de Janeiro, Brazil.  In it, he analyzes the development of the working-class movement in Brazil in the context of the recent World Cup soccer tournament that took place. He takes us through the various worker, student, and indigenous struggles against the displacement, gentrification, high cost of living, and lack of social services that have intensified with the government’s decision to host the World Cup in Brazil. In addition, Ian breaks down the various social forces in the resistance movement, the evolution of political tactics on the street, and the possibility of cross-sectoral rank-and-file militancy.

Come here from Ian at our Revolutionary Skype Series event occurring this Saturday July 26th, noon at La Peña Cultural Center (3105 Shattuck Ave., Berkeley, CA). We appreciate his work and thank him for bringing to light the process of the Brazilian working-class’ political re-awakening.

For more information about the event see here.

Skype Series Event! What did Brazil’s workers’ struggle look like leading up to the World Cup? (7/26)

The fifth session will involve a militant currently participating in the protests around the World Cup in Brazil.  The event will take place on Saturday July 26th, noon at La Peña Cultural Center (3105 Shattuck Ave., Berkeley, CA).  Below is a description of the event and the leaflets for the series.  Hope to see you there!

Sao Paulo metro workers, Rio de Janiero airport workers & bus drivers in Natal all on strike while huge popular mobilizations were held throughout the country. Join Advance the Struggle and La Pena 2nd Generation for a Skype conversation with Ian Steinman, activist in Rio de Janiero, about this wave of struggle in Brazil, its relationship to the world’s most popular event, and the current state of the movement as the cup comes to an end. 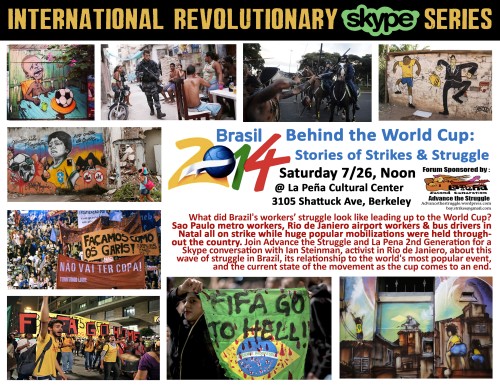