“We Are All Workers” say UW student militants 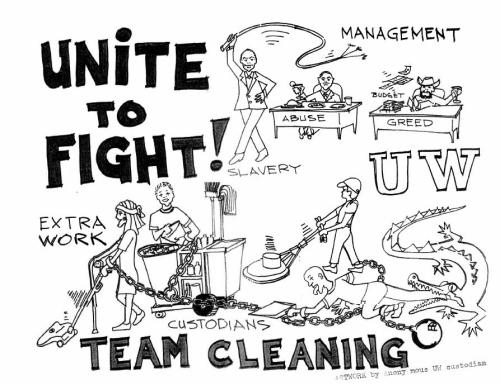 Illustration by an anonymous University of Washington custodian

The anti-budget cut movement has unfolded quickly in the past few months after a UC walkout on September 24th of 2009 served as a catalyst for the already existing but increasingly uncreative organizing around the budget cuts on universities and community colleges that’s been going on for years in California and across the country. The past years has seen a large shift from isolated local struggles that involved petitioning or the annual March On Sacramento to more concerted and united actions and tactics reaching out internationally.

The tactic of occupation had a domino effect, injecting the politics of struggle into a movement that is broadening to a larger working-class struggle against increased exploitation levied against working people because of the capitalist crisis. March 4th, the date decided by a CA Statewide Organizing Conference for a statewide strike and day of action against the cuts, has expanded to become a national day of action to defend public education. Here in California there has been a push to connect the education struggle with defense of social services like healthcare and public transit, workers fighting against layoffs and speed-ups, and struggle against the closing of homeless shelters.

This move towards a more working-class-focused struggle for education, jobs, and social services has diversified the face of the movement beyond that of the angry privileged college student who just wants classes and cheaper tuition.  A more diverse face, however, is a step behind organizational unity.

END_OF_DOCUMENT_TOKEN_TO_BE_REPLACED

While we prepare to participate in the Northern/Southern California March

4th Coordinating Committee meetings tomorrow, let’s examine a strike of students and workers that happened a few years back at UC Santa Cruz.

Participants should recall the struggle that went down in the process of building for the strike: struggle amongst various Left tendencies, struggle with union bureaucracies, and struggle with student organizations to participate in the strike effort.  The results are clear in the short film Estamos Aqui.

What March 4th will look like is not yet clear.  Organizing efforts have been happening in Oakland, and folks in San Francisco are preparing as well . . . Meanwhile organizers in LA are taking steps towards establishing March 4th Committees.  It’s becoming clear that a strong left wing tendency has potential to emerge as March 4th organizers and organizations are recomposed.  Let’s keep it moving.

This is a review of Angela Davis’ Autobiography, written by a friend of AS who does not consider herself a communist or a revolutionary but is learning about both as she organizes against budget cuts at a Bay Area community college. We are posting it because we like its raw feel and honest approach to issues that Angela Davis confronts throughout her life. These issues are political and personal, two dimensions to human existence that AS does not see as being separate.  We do not necessarily agree with all the conclusions our friend reaches in this, her first publicly posted writing. Nonetheless, we support the open-minded b 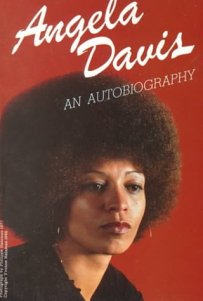 ut critical engagement with primary source materials that is crucial to the development of creative, scientific, non-dogmatic revolutionaries. We are excited to present her views to the blogosphere so that she may learn from the diverse perspectives that visit our blog, and so that you all might learn from a fresh new voice.

Angela Davis spent the majority of her childhood in Birmingham, Alabama. In the beginning of her autobiography she speaks of the intense racial tension between whites and blacks, the inferiority of her black elementary school in comparison to the whites, and the self hatred within the black community that she experienced growing up in the south. This part of the book was one of the most memorable parts for me. The bombing of houses with black families by racist white people was such a sad, traumatic experience for Davis but, even more sad, was her growing desensitization to the bombings. They happened so regularly that she grew to accept them as just another part of being black in the racist south. I felt so sick and angry reading this part of the book. I can’t imagine how this black community must have felt and I would think that many of them would have wanted to retaliate by bombing the houses that whites resided in.