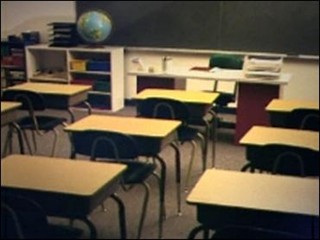 Los Angeles Unified School District announced Thursday it is canceling the bulk of its summer school programs, the latest in a statewide wave of cutbacks expected to leave hundreds of thousands of students struggling for classes.

The reductions, which will force many parents to scramble for child care, are the most tangible effect of the multibillion-dollar state financial cuts to education. Community colleges also have announced summer program cancellations. – LA TIMES

Commentary by JAI: The lessening of the value of labor-power finds it complement in the depreciation of the worker’s skills (i.e. labor’s ability to add value during the production process.  Similarly, when it comes to value-realization (i.e. the sale of the produced items), the workers’ ability to purchase the products of its own labor is diminished.  A virtual virtueless spiral ensues.

The value of labor-power, as the value of any and all commodities, is itself the sum total of the values of the goods and labor that go off into its making.  A large portion of that value is added to the worker-to-be during the education process.  The diminishment of the school year, ‘pupil-free days’ and now the cancelling of summer school indicates the depth of the capitalist crisis.  System-wide, labor is that which the capitalists cannot do without.

Labor is the only source of new value (surplus-value) though competition compels the individual capitalists to cut its own labor-force.  This is the fundamental contradiction of capitalism.  And this shrinking of the time and resources and personnel allocated by the system towards the education of its replacement labor force is but a parallel in the education factory of what takes place in the industrial factories.

There is absolutely no reason (save capitalism) that schools should cut back on education.  There is no reason that factories ought close (save temporarily when they have (and could) produce what they are needed to produce).  There is no reason for the insanity of wars, homelessness, poverty and famine save that these things exist eith because someone can make money off of them or ‘there is no money in them’.  These are the evils of production-for-profit.  These are the stigmata of capitalism.

Now!  More so than ever.  It is socialism or barbarism.

When we think about the victims of police brutality in our communities, names like Oscar Grant and Sean Bell come to mind. We know that young black men are constantly victimized by the police, but we don’t often talk about the way police violence is used against womyn.

Police brutality, when it happens to a Sean Bell or Oscar Grant, quickly takes a certain shape in the public’s mind…(he was a drug dealer, a gang banger, etc.)

But what about the womyn who are victims of police brutality? We don’t talk about police violence that happens to womyn enough or at all, so we’d like to spark that discussion.

This first video is of police deputy Paul Schene, beating this teen girl, who’s been incarcerated. This happened last year, but he went to court back in March, and pleaded not guilty to 4th degree assault. This was before the video was leaked. Before this he had been investigated for shooting people twice, killing one, in the line of duty. Both times his acts of violence had been justified. How surprising.

The second video is news footage of the cops beating another black teen, Sheila Stevenson, whose crime was bicycling on the sidewalk at night.

We need to start talking about the ways in which police brutality is used to discipline womyn’s bodies. Whether it be strip-searches, cavity-searches, pat-downs, rape, sexual harassment, or just straight up assault and murder, womyn are systematically targeted by a police apparatus that represents and is a reflection of the racist, sexist, capitalist state it serves. 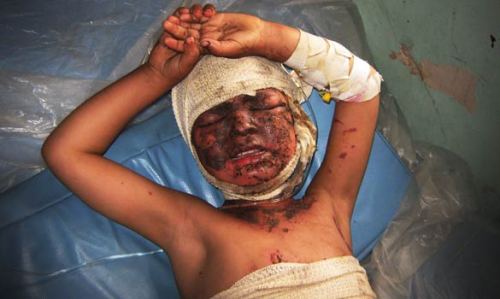 A child wounded in the US bombing of Farah

A recent airstrike in Farah, Afghanistan is said to have killed 120 people.

Here’s an excerpt from a report by Jeremy Scahill:

As President Barack Obama prepares to send some 21,000 more US troops into Afghanistan, anger is rising in the western province of Farah, the scene of a US bombing massacre that may have killed as many as 130 Afghans, including 13 members of one family. At least six houses were bombed and among the dead and wounded are women and children. As of this writing reports indicate some people remain buried in rubble. The US airstrikes happened on Monday and Tuesday. Just hours after Obama met with US-backed president Hamid Karzai Wednesday, hundreds of Afghans—perhaps as many as 2,000— poured into the streets of the provincial capital, chanting “Death to America.” The protesters demanded a US withdrawal from Afghanistan.

In the face of such horrific murderous barbarism, the silence from the “Antiwar” left in the U.S. is deafening. IS there an Antiwar left, left? Comments welcomed.

Here’s a report (with video) discussing the recent May Day Protest in Calcutta where sex workers marched demanding the legalization of sex work.

The question of sex work is touchy in general, but amongst the Left and Feminists in particular.  There are groups denouncing those who seek de-criminalization of sex work in the Bay Area due to the entanglement of human trafficking which they claim goes unchecked if sex work is decriminalized.

These Indian sex workers are demanding the right to be able to earn a legal wage in return for their work.  If they were to get this, wouldn’t it represent a more accessible terrain for class struggle on their part?