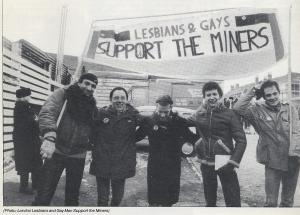 spaces together, learning about each other over a beer?  Can you imagine these men marching behind members of the queer community and under a queer banner in a parade?  Seems hard to imagine . . .

Identity politics has long maintained that differences of identity along lines of race, gender, ability, and sexuality must be respected and tolerated.  This has often been counterposed to what is characterized as the “class reductionist” approach of class unity above all else.  The history of race riots, domestic violence, and macho heterosexism within the proletarian movement is all too real, and has provided the material basis for a form of postmodern politics in the 1980s towards today which has defensively fetishized forms of social difference.

Within this context, the communist movement has sought in various ways to reconcile the contradictions and move towards a higher plane of political unity.  Unfortunately, often times these moves have ended up reifying differences – bowing to forms of sectoralism which keep differences static, with each “identity group” staying safe within its own silo – or attempts to paper over the real differences and antagonisms which exist in society and amongst the proletariat in particular, which amount to reifying the differences from another angle.

As a young generation of communists coming up in this context, we are seeking to carve out a space which can account for difference while also aiming towards the pedagogical development of radical understanding and unity amongst people of different backgrounds and identities.  We seek out the common class 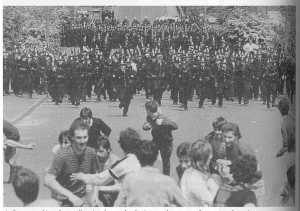 interest amongst the proletariat in ways which facilitate the learning process amongst all its sectors – where male identified workers are able to break down the patriarchal values instilled in them since birth; where women workers are able to assert themselves amongst men and feel confident that they will not be silenced by a culture of machismo; where trans workers are able to occupy space with their fellow cis-workers and engage in radical dialogue that facilitates understanding between them, along with creating the space to strategize about taking down the boss. END_OF_DOCUMENT_TOKEN_TO_BE_REPLACED

What Communists Can Learn From Native Struggle: Sogorea Te and Primitive Accumulation

Driving North from Oakland, past West Berkeley’s smokestacks and Richmond’s industrial warehouses, you eventually cross the Carquinez bridge to the first city in what is referred locally as the North Bay – Vallejo, “The

City of Opportunity.”  Vallejo is known as the home of Mac Dre, Sly Stone, and E-40 (amongst others), as well as to a sizeable Pilipino population.

The city bears the name of General Mariano Guadalupe Vallejo, one of the biggest beneficiaries of the Treaty of Guadalupe Hidalgo, that piece of paper that codified the theft of over half of Mexican land. That treaty marks the transition from Mexican colonial domination over native american peoples, to an even more heinous form of racial domination under Anglo rule. Indians were the base of the productive system as slaves to Mexican and Anglo ranchers, producing wealth that carried California eventually to become the richest state in the richest country in the world. Today, Vallejo is known internationally as one of the first cities to go bankrupt during the financial meltdown of ’07-’08 and the native community is rising to assert their legacy, reclaim their history and resist capitalist development of one of their most precious ancestral burial grounds:  Sogorea Te, or Glen Cove. END_OF_DOCUMENT_TOKEN_TO_BE_REPLACED