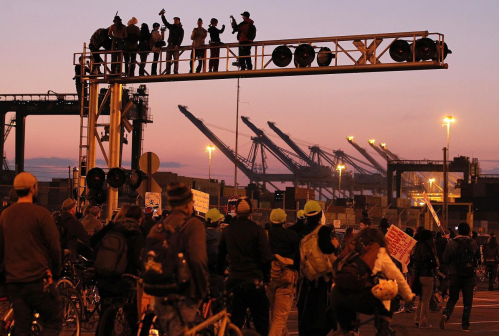 Part of our regular practice together is engaging in short term studies of relevant questions coming up on the pro-revolutionary left.  One of our recent studies has been centered on the strategic importance of sites of capital circulation as places where pro-revolutionary activists and proletarians should focus our intellectual and practical energies.

We’re offering up a formatted version of various texts that have already been published as well as a powerpoint we’ve used among ourselves to help frame the texts.

The texts in question are from Endnotes, Mute, Degenerate Communism and Libcom.  We give props and appreciation to those authors and publications for putting out important theoretical and strategic pieces to help pro-revolutionary activists around the world clarify our thinking.

Let us know what your thoughts are if you’re studying similar stuff, ways in which you’ve formatted study packets, and other thoughts.

Reader and presentation after the jump.  Enjoy.

END_OF_DOCUMENT_TOKEN_TO_BE_REPLACED

Skype Series Event! Between Spectacle and Resistance: Reflections On Struggling in Greece Today (6/28)

The fourth session will involve militants from Greece who have been actively engaged in the anti-austerity movement, participated in the From the Greek Streets blog, and have contributed to the book Revolt and Crisis in Greece.  The event will take place on Saturday June 28th, 12:30pm at La Peña Cultural Center (3105 Shattuck Ave., Berkeley, CA).  Below is a description of the event and the leaflets for the series.  Hope to see you there!

Between spectacle and resistance: reflections on struggling in Greece today.

The event will include reflections on the current state of affairs of the wider antagonist movement in Greece today: its recent struggles, its shortcomings, its potential ways forward. What lessons do six years of continuous struggle against police and neoliberal repression leave us with? And what may be the potential ways forward? 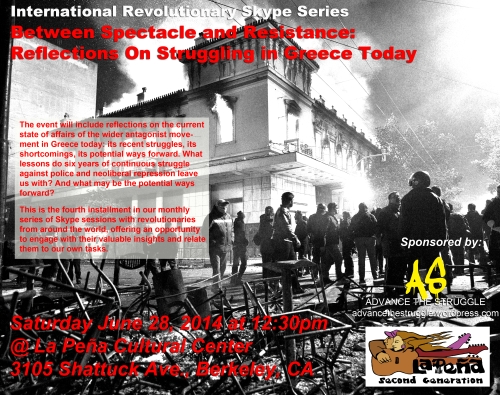 20 years ago today, there was a nation-wide rebellion against the police and private ownership of property. The incident that sparked this rebellion was the innocent verdict given to the Los Angeles Police Department pigs who beat Rodney King nearly to death while being videotaped by the relatively new technology of handheld videotape recorders.

In commemoration of the 20th anniversary of the 1992 Riots which began on April 29, we want to note some of the great music that came out of this rebellion.  It has been said that if one is to learn about a peoples, one should look at their poetry and their songs.  Advance the Struggle finds this true and believes that culture and art are going to be fundamental to a proletarian led Socialist revolution in the US. If we look around today (2012) and see the relentless police terror on Black and Brown people, coupled with the capitalist economic depression which is far worse than that of 1992, and we see all the positive organized resistance to it, we might start to believe that we are on the cusp of a pre-revolutionary situation. Looking back to ’92, things felt more like they were on the verge of a civil war – and one of the best ways to get a feel for that is through the powerful music that the riots produced.

More after the jump:

END_OF_DOCUMENT_TOKEN_TO_BE_REPLACED

Posted in History, Racial Unity in the Class Struggle

When Rodney King was severly beaten by 4 LAPD officers and the police were found not guilty, Los Angeles exploded in rebellion and riots.Thousands upon thousands of working-class residents of all races broke into commercial stores taking commodities for free.

The media tried to paint the riot as angry violent Black people attacking working-class white people and Korean shop owners– they were consciously trying to turn the multi-racial rebellion into a racial war.  But the media was not able to supress a powerful radicalization of LA consciousness.  Bloods and Crips started having serious discussions about unity, positive revolutionary energy was flowing from the ghettos and working-class neighborhoods; these developments are captured well by the documentary Bastards of the Party. 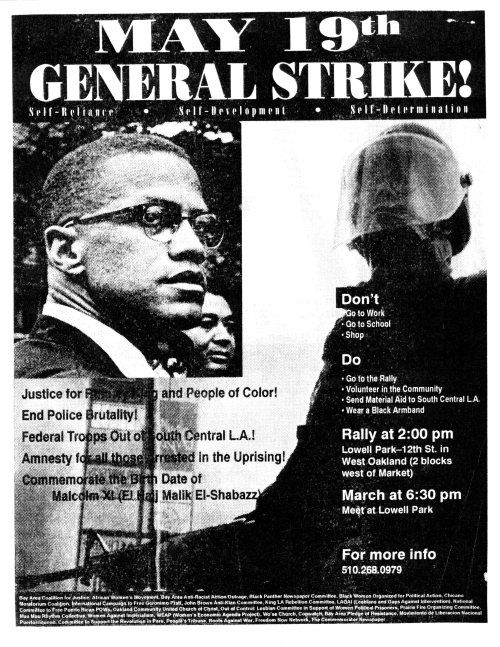 It’s important to remember that we are all facing the sentencing hearing for officer Mehserle on November 5th. The flyer above is the political effect of the radicalization produced by the ’92 Los Angeles rebellion against the acquittal of Rodney King’s attackers. What do these two struggles, separated by 18 years, have in common? The Oakland/SF local (Local 10) of the longshoreman’s union ILWU is planning to do a job action and/or rally on October 23rd to fight for justice for Oscar Grant, and militant rank-and-file union members have argued that their radical action in isolation will have a very limited effect. One ILWU rank-and-file worker argued that what we need is for BART (lightrail) workers, bus drivers, government workers, private workers, to also shutdown their workplaces in the name of Oscar Grant. This form of struggle can be more effective than breaking windows or pleading with the government through non-profits because it uses the greatest power that working people have: our ability to get organized and control the economy. We’re posting the flyer from ’92 to make these kind of connections with another historical moment where riots began an ascending wave of radicalization. Around the country people look to the Bay as the current front lines of the struggle against police brutality: will we rise to the new possibilities and show ’em how it’s done?

Moving Beyond Violence vs Non-Violence: Justice for Oscar Grant means justice for all 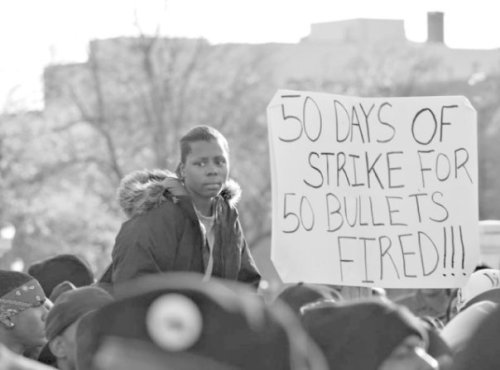 Shot from a Sean Bell police murder protest in NY

The Oscar Grant movement and the 2009/2010 rebellions in Oakland have triggered a lot of discussion about violence versus non-violence. What are the correct tactics to fight against state violence? How do we get justice for innocent Black and Brown men and womyn who are brutalized and murdered by the police? These are the questions that continually ran through my mind at the 2010 protest/rebellion on July 8th in downtown Oakland. During the earlier part of the protest a lot of non-profiteers, liberals, and regular people were talking about this debate between violent and non-violent resistance, and largely condemning acts of ‘violence’. Youth Uprising (an Oakland non-profit) was passing out flyers for their community gathering, which said “violence isn’t justice.” All around there was encouragement to be non-violent and peaceful. There was also a serious racialization of violence by the media, the churches, and the local government and non-profits. Violence is characterized as something coming from outside of ‘the community’; beware of the ‘outside agitators’ that come in the form of white anarchists. Before the verdict was released I listened to my co-workers talk about these ‘agitators’ who were coming into Oakland from everywhere to wreak havoc in our city. It was alarming to see this panic and fear of anarchists being conjured up by the bourgeois media and the State. There is some truth to this statement that violence does come from outside of the community, but not in the form of anarchists, but in the form of racist killer cops. What’s really violent is living in a world where people die everyday from curable diseases and hunger; where working-class youth are deprived of an education by closing schools and building more prisons; where the police can kill innocent men and have it recorded on video and still not be guilty of 2nd degree murder!